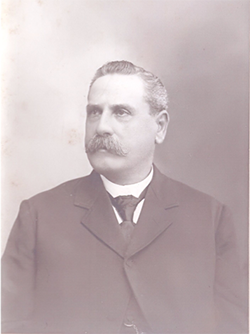 “A man of great enterprise and forethought.”

Mr. Gilbert, one of the founding fathers of Seaside, was born in the coastal town of La Rochelle, France on April 16, 1845, the son of Frank and Mary Gilbert. At the age of twenty-four and just prior to the Franco-Prussian war (1870-71), Alexandre married Emma Loncol (born on June 14, 1845) in Paris, France on January 22, 1869. Emma and Alexandre had three children – Angele, Marthe and Alexandre (Jr). In 1871, after the war, the Gilberts immigrated to San Francisco, California. While in San Francisco, Alexandre developed his skills as a carpenter and cabinet maker. He also built and established the Gilbert House, a hotel and boarding house.

L earning in 1881 that land was “cheap” in Oregon, the Gilberts moved north to Astoria. Stuck by the rugged beauty of the Oregon coast and the resemblance to his native France, he saw great potential and spent the next 54 years helping to develop businesses, property, and communities in the area.


One of his greatest achievements was the 1.5 mile Promenade. Alexandre wanted the beach to remain open to the public, so he acquired the property and then donated it to the city. He also developed the downtown business district called the Gilbert Block. He was Mayor of Seaside during the 1912 fire that burned most of the city, and is credited with the leadership needed to turn this horrific event into an opportunity to rebuild Seaside with an emphasis on permanent concrete buildings.


It has been said of him that he was “a fine representative of the solid and sustainable business men of Clatsop County” and “a man of great enterprise and forethought,” “….a citizen of affluence and influence.”


Emma died in the house on Jan 12th, 1917 at the age of 72 just a few days short of the couple’s 48th wedding anniversary. Alexandre died in the house as well at the age of 90 on April 26, 1935. In his honor, the business of Seaside closed during the funeral and on the way to the cemetery family took a detour so they could carry him one last time past his office in the Gilbert block.


After Alexandre Gilbert died, his heirs sold his real estate holdings. The unique Queen Anne home eventually became a Hotel inn in 1992. The Gilbert Inn is the grandest inn of its kind in Seaside today. It’s fascinating to stay a night in the home of one of the coast’s most important and interesting pioneer businessman. (Collected) 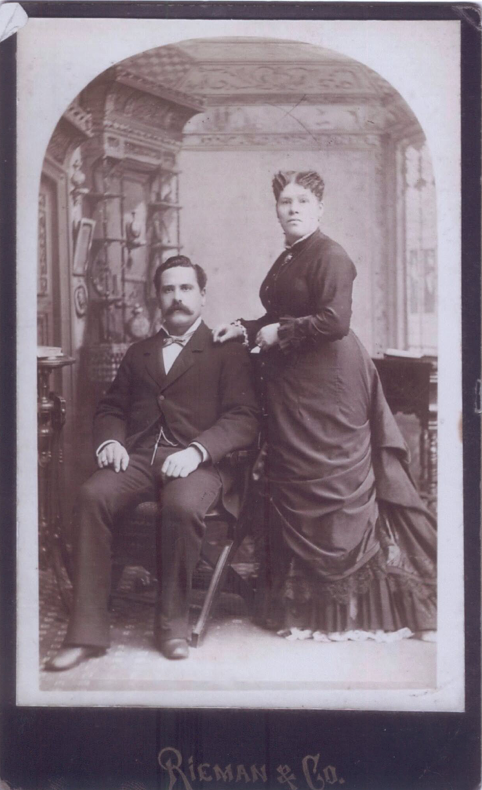 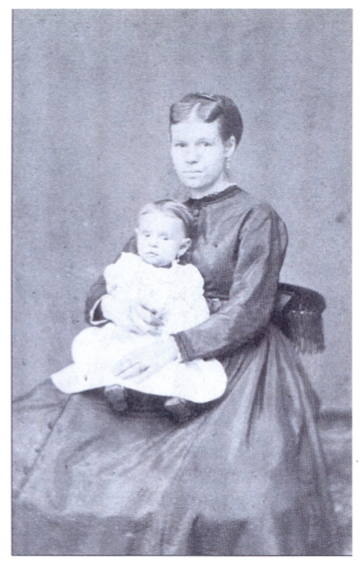 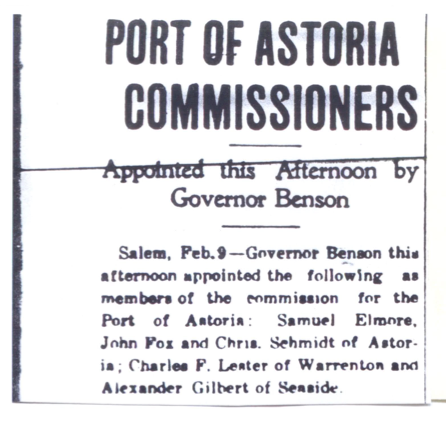 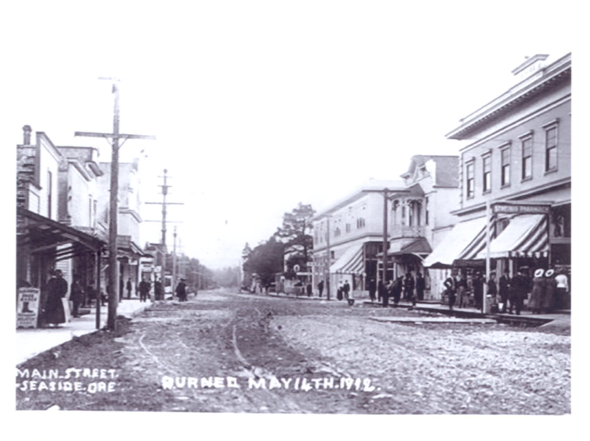 Gilbert was primarily known as a land speculator and real estate broker. He was also in the insurance business. 1875 showed him involved in a land transaction between William Hodge and J. T. Hulkey. He became more and more involved in real estate in the Seaside area as the opportunity for growth presented itself. In 1889, he was one of the incorporating partners of the Hermosa Park land Development Company with Charles Fulton and Frank Dunbar, all of Astoria. Alex Gilbert took an active interest in the growth of Seaside. He was the land representative for the firm of Cartwright and Humason of Portland. These two men were involved in the disposition of the Ben Holladay property. Charles M Cartwright obtained a large portion of the Holladay property, while the Hermosa Park Land Development Co. obtained the remainder. T. B. Morrison also added to the holdings of Hermosa Park.

One of the pieces of land that Gilbert acquired was lot 1 of Section 21, located on the ocean front between now Avenue A and Ave C. This piece of property became known as Ocean View. In 1880, there were three houses located on this property; Gilbert’s (Still standing), the summer home of Captain George Flavel of Astoria and the summer home of Charles Fulton. All of the houses were spacious and elegant. They outshone their neighbors by far.

Alex Gilbert Sr. and his son Alex Jr. operated a real estate and insurance business together. Junior was also secretary of the Hermosa Park Development group. Alex Sr. was very active in political affairs both in Seaside and county wide. In 1910 he served on the Astoria Port Commission. He was Seaside’s mayor from 1912-1916. He was a friend to the businessman, especially after the fire of 1912. Much of the business district had been destroyed, with most business either underinsured or not insured at all. Alex Gilbert bought up some property after the fire, but he also leaned money to several businessmen to rebuild or repair as necessary. The Gilbert Insurance Company carried much of the coverage on the destroyed buildings. He saw to it in capacity as mayor as well as businessman, that the town recovered and people continued to prosper. He gave the city the drive and purpose to carry on. 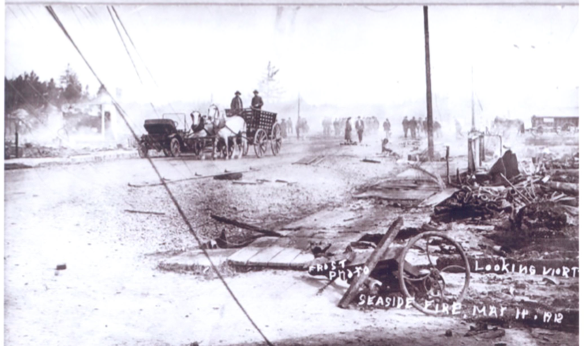 One of the buildings destroyed in the fire was the Catholic Church on Court St. (now Ocean Way). Due to unfortunate circumstances, it was necessary to sell the property to pay outstanding debts owed on the construction of the church buildings. For the next year members met in Moore Hotel. In 1913, Gilbert donated property to the church and started a building fund boom. A new church was erected and dedicated in 1914. Our lady of Victory Catholic Church still stands on the site at the corner of Ocean Way and Columbia.
Upon his father’s death, Alexandre Gilbert Jr. continued most of the company business. None of the other Gilberts played a prominent role in the business or political life of Seaside. One of the landmarks of Gilbert’s time remains today, his name is inscribed on a large building erected after the fire of 1912. The Gilbert Block is a concrete memorial that will remind us of Alexander Gilbert for many years to come. (Collected) 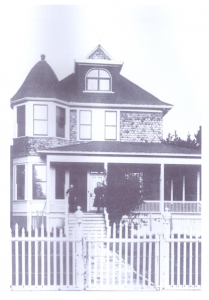 The Story of Gilbert Inn

The history of this beautiful home began in 1885 when Mr. Gilbert built a modest 2-room cabin for weekend retreats from Astoria. Alexandre’s business interest grew in Seaside along with his desire to move his family to the area. By 1892, he completed a grand Queen Anne style addition to the modest cabin resulting in the home that stands here today.

The artisans and materials used to build this home came from the region and this impressive home stands as a testament to that old world craftsmanship of times past. In the basement, you’ll find large old growth beams that measure two feet in diameter and large boulders pulled from the river to use as foundation blocks under the beams. The walls and ceilings in the historical wing are all original tongue and groove fir. The solid construction and choice materials have survived for well over a century. In 1990, five more guest rooms were added around and above the original 1885 cabin further adding to its grandness.

As guests enter the Inn, they are greeted by a prominent brick fireplace, cozy turret sitting area and a hand-carved mahogany front desk. The lobby the original Gilbert family rug. It’s a finely woven Persian rug from southeastern Iran in the early 1900s. It is a classic piece- covered with floral design elements in shades of rosy red, dark and light blue, ivory and gold. The central field has a red background and the large Herati ‘samavar’ border design on a dark blue background. Ends have been professionally restored where cotton fringe was exposed to wear. 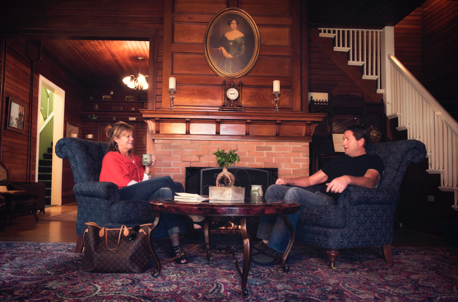 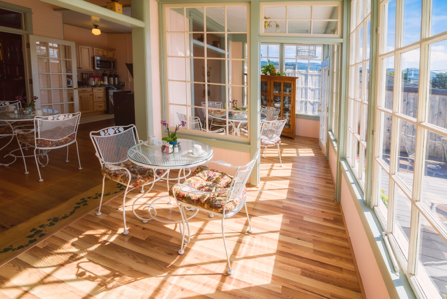 Passing the main entry, guests encounter the favorite retreat area, the sunroom. This relaxing room fills with warm natural light and makes for a great sitting area to sip tea while reading a favorite book or newspaper.
The house is full of antiques, family keepsakes, art, and a beautiful pump organ that, when played, brings the entire house to life. Two chairs decorated with needlepoint, hand sewn by Emma Gilbert, still sit in the home, residents since the moments Emma placed them there. 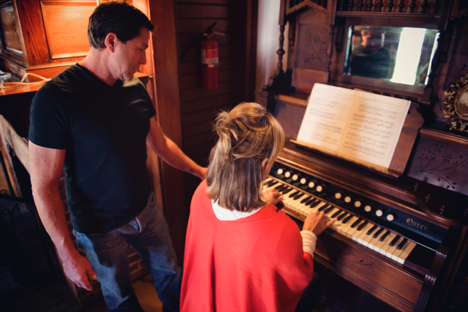 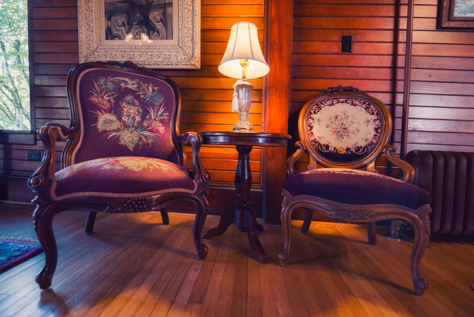 Each of the eleven guest rooms, with its own private bathroom, is decorated with period furniture, classic antiques and comfortable four poster beds.

The Gilbert Inn is the perfect blend of the Victorian charm of a bygone era and the modern comforts of today. (Collected) 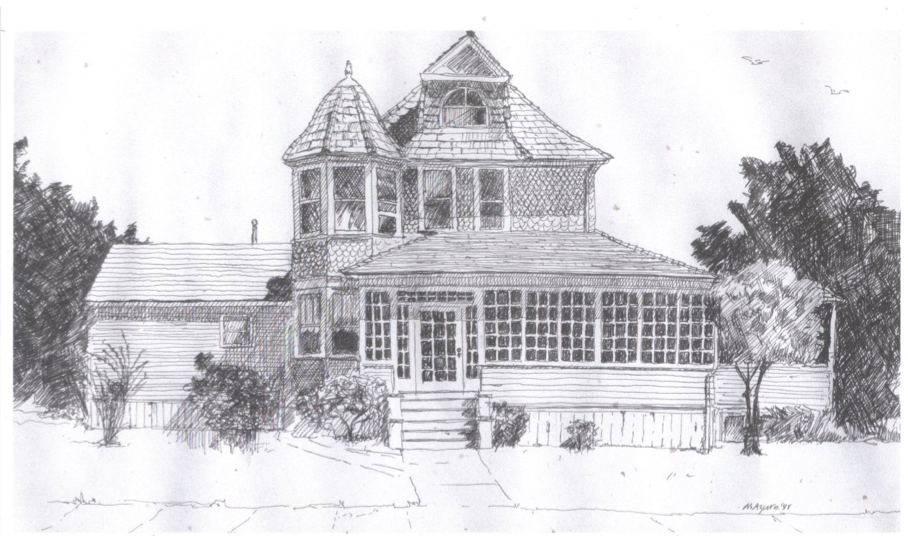